The second Mini Session of this year took place at the HLW Kufstein in Kufstein.

Once again it was the goal to give students a first impression of the work which takes place in the European Youth Parliament by putting on the main parts of an EYP session, namely Teambuilding, Committee Work and General Assembly.

The day started of with a short general Team Building in which the 9 Officials introduced themselves to the 30 delegates. The Delegates were separated into smaller groups which discussed interesting topics like for example quotas of women in leading positions.

Afterwards the outcomes of these discussions were presented in the General Assembly, which was moderated by the president of the Session Sophia Simmill. The presentations were followed by rounds of Questions and Answers after which Mrs Simmill closed the Session with the European Anthem and a talk including further information about EYP.

This successful Session was made possible by the efforts of the Head Organiser Ali Nourouzi and his team. We hope to see many of the Delegates return to EYP at one of the upcoming Regional Sessions.

Do you also want to participate at one of our Mini Sessions? Contact the responsible Board Member Robin Hietz under robin.hietz@eyp.at! 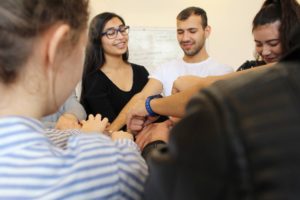 EYP Mini Session Villach
We use cookies on our website to give you the most relevant experience by remembering your preferences and repeat visits. By clicking “Accept”, you consent to the use of ALL the cookies.
Cookie settingsACCEPT
Manage consent